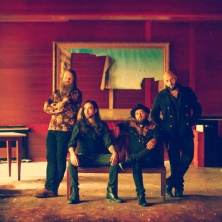 It was born at the end of 2003 with a need to hit the audience with an hard dose of rock sound and to shred the world's stages!
Those who have seen them live will be able to tell you how this rockers are able to tear up a stage as well as any of the rock greats.

Biographie
Those Furious Flames is a rock band from Ticino, the southern part of Switzerland.

THOSE FURIOUS FLAMES‘s 2010 studio album, "Trip to Deafness", was met with vast critical acclaim and the band toured during the following years in support of the album with some acclaimed gigs all over Europe (Russia, U.K, Sweden and more) and U.S.A. (California) and amongst the others performing in legendary venues as "Whisky a GoGo", "Viper Room", O2 Academy London and with bands as Misfits, Turbonegro, Faith No More, Papa Roach and many more.

In december 2012 the band entered the studios to record 10 new songs produced by IAN PERES (WOLFMOTHER bass/keyboard) who had this to say:

"They're explosive live, and musically rewarding to listen to. It's good to see a band bringing back that thunderous energy. Their songs hit that sweet spot between atmospheric psychedelia and primal earthly rock."