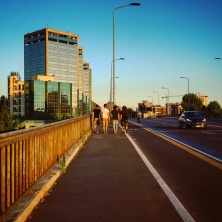 Polarbeers were a progressive punk band from Milan, Italy whose music included rock, punk, stoner, grunge, blues, psychedelic and funk elements. The result was a Different Music, for Different People.

Pour jouer, nous avons besoin de: PA and power supply in the front fro 3 pedalboards and in the back for 3 amps.

The band released their critically acclaimed debut record in June 2013; while touring and promoting the album, they published the videos for Everywhere But Home and 1MV, together with their very own interpretation of the Bee Gees’ classic disco hit Stayin’ Alive.

On October 8th, 2016 they released their second studio album, New Revolution: more mature, more dynamic, more eclectic – more Polarbeers!
Videos for Down the River, featuring some of the Rockin’ 1000, and Meteoropathy anticipated the album.

The band released a hardcore version of Jefferson Airplane’s “Somebody to Love” only to those who attended New Revolution’s release party.

They disbanded because of different life choices, after playing their last show on July 22nd, 2017.
Photo presse
Press Book