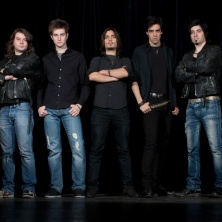 Tipsy Road is a Swiss rock band from Lugano, Ticino.

The most important things for Tipsy Road are quality, passion and the strong willingness to carry on with a new kind of rock sound.

Répertoire
- When All Is Silent
- Farewell
- Wraith
- Anna Lee
- Faceless
- Bridge of Fire
Biographie
Its first EP “Breakin’ the Line” was released in September 2009 and the videoclip of the single “Naked” was realized on January 2012, which was finalist in the national italian "Videoclip d’Oro" contest and won the best direction award.
In january 2013 its first full-length album "Somewhere Alive" was released.
The band becomes well known in the south of Switzerland, where it has played in the most important festivals, open-air and pubs, winning the first prize at the Palco ai Giovani Contest 2012.
However Tipsy Road has also played outside of Ticino, like at the Montreux Jazz Festival, in Zurich, Uster and in 2011 has won "La Boggia Band Contest" in Italy.
Photo presse