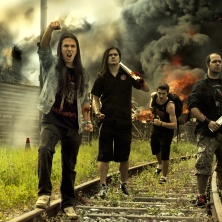 Répertoire
- Ghost of Despair
- Saved by Death
- Fire in the Dark
- Burn You All
- Fuck This Sausage and Eat the Smelly Cheese
- Eternal Nightmare
- Sulfure (Part I): The Dead Era
- In the Heart of Madness
- The Empire of Fire
- Slavery
- Destruction
- Becoming Your Master
- Curse
Biographie
It all began in 2007, when Jonathan and Raphael decided to play music together.They tried looking for other band members and Jonathan thought of Maxence Bender, one of his childhood friends and taught him to play the Bass.
The other band member was Thommaso Rizzo, a friend of Raphael who joined the band as the 2nd guitarplayer. Jonathan meets the future drummer, Fabien Fivaz.

Raphael quits the band soon later and Kevin Valloton joins them in November.Jonathan started to growl and Kevin would prefer a Heavy-Melodic kinda voice. He then quits the band and is replaced by Nicolas Solioz, which lived in Valais.

Nicolas, tired of his 3 hours-a-day journey, decides to quit. The other band members understand his decision.
They look for another guitarplayer and finally get to meet Martin.In 2012, the new guitarplayer joins them, Telmo Santiago.