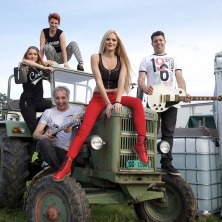 SPARROHS was formed in 2012 in Zurich Switzerland right in our office, as we were already a team working on film productions together. When people ask us what style of music we play, we say: “Hot Rock…it's a new genre".

We are from 5 different countries: Denmark, Switzerland, Iceland, Netherlands and New Zealand.

Our dream as a band is to let the music be our guide instead of trying to control it to score some radio time or juicy contracts. We want to let the music tell us the story, as we continue writing songs. Of course we’d love to be all over the radio and with the people in their cars, on their headphones and most importantly in their hearts! It’s time for some Hot Rock people :-)
For more fun info and updates about our band we keep a hot website updated regularly and you’re welcome to check it out.

Biographie
SPARROHS was formed in early February 2012 in Switzerland. The band came together through the company Sparrows AG, a film production company in based Feldmeilen, Switzerland where they all also work together.
In late April 2013, we took our music out for the first time, to the streets of Zurich. From that point on we've continued putting one foot in front of the other, playing the music all over Switzerland and exploring our sound.

As a pretty international band, with an explosive amount of energy, we're getting ready for ever bigger stages!
Photo presse