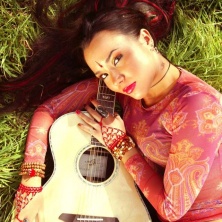 Kiana's first musical influence growing up was her mother, who was a folk singer in Hawaii during the 60s, and then later expanded to a variety of Pop, World, Rock, and Classical music.

Répertoire
- A New Way
- Vertigo
- Ocean Light Waves
- Remembrance
Biographie
Japanese/American songwriter, Kiana, is based in Honolulu (HI) USA. Young but highly experienced, she featured collaborations with Gispy Kings and J_POP bands . She performed in many venues of the world, including Tokyo, L. A. and San Francisco. Kiana is gonna be back to Europe in the summer of 2012, after the two successful tours of 2010 and 11, where she got a large fan base and get noticed by the music business "experts". Kiana is a versatile artist, and passes with disarming simplicity from busking, to top class stages She performs solo, and just with voice and guitar is able to share Emotions with the audience who do not easily forget Kiana and her wonderful voice.
In 2011, a Kiana's original song from her EP " Vertigo" became part of a compilation produced by Lufthansa Inflight Entertainment among top class artists such as Adele, Gianna Nannini, Christopher Cross, Jack Johnson, Cat Stevens and Phil Collins.